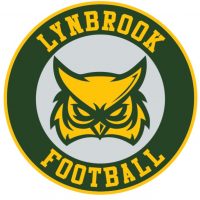 About:
Lynbrook Varsity Football Team hosted a benefit game on October 22 to raise money for Camp ANCHOR, a Town of Hempstead camp that supports children and adult residents with disabilities. Lynbrook has many students who both attend Camp ANCHOR and who volunteer to work at Camp ANCHOR, and we have players on our team whose siblings are campers there. When we approached the parents about picking a charity, they unanimously agreed that Camp ANCHOR would be the best charity because it would touch more kids who are in need. One of our senior players has a brother who suffers from Cerebral Palsy. Originally, we wanted to do a benefit game to raise money for him. However, when I approached the parents in June, they suggested that we raise the money for Camp ANCHOR so that more children in our community could benefit from the money raised. So that is what we set out to do. The team helped design t-shirts to be sold the week leading up to the game. We made Antonio an honorary captain for the game and invited Camp ANCHOR volunteers and campers to “run out of the tunnel” with the team and join us at midfield for the coin toss. All proceeds from the gate were also given to the Anchor Fund as well as all sales from the game. The team wore special jerseys to honor the mission of ANCHOR and to represent the campers and volunteers. In total, the Lynbrook Football Team raised $3200 to help support the mission of Camp ANCHOR.