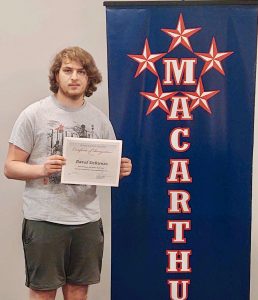 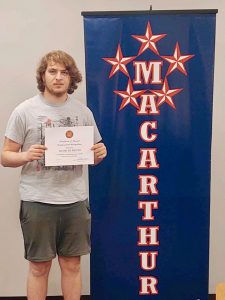 David DeRienzo, a senior from General Douglas MacArthur High School, was recently recognized for his outstanding community service. He received the Certificate of Special Congressional Recognition from Key Club and a Certificate of Recognition from New York State Sen. Kevin Thomas. Both awards celebrate those who demonstrate a positive connection with their community, along with outstanding and invaluable service.

From his sophomore to senior year of high school, DeRienzo has played an active role in the Key Club organization. He has held four different positions among MacArthur Key Club, the New York District of Key Club and Key Club International. DeRienzo is currently the president of MacArthur’s Key Club and was the Key Club Lieutenant Governor during the 2019-2020 school year. His leadership contributions have made a strong impact on the school community and beyond.

In addition, he has served as a Boy Scout from a young age and recently began working on his Eagle Scout project which consists of adding more than 400 cubic feet of growing space to his temple’s playground-turned-garden. All the food grown in the garden is donated to food insecure congregation members and to the organization Island Harvest.

“With my addition to the garden, including building three raised planter boxes, I hope to make the garden more accessible to those who have back problems and normally can’t contribute, as well as increasing the variability of what crops can be grown and donated,” said DeRienzo.

The Levittown Public Schools congratulates him on these outstanding recognitions.