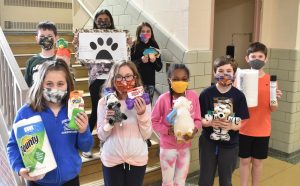 A pet supply drive at Saw Mill Road Elementary School in the North Bellmore School District had a personal connection for many students, whose family pets were rescued from animal shelters. That’s why it was no surprise when two big boxes were filled with donations during the two-week collection drive hosted by the student council.

Students were asked to donated items for Last Hope Animal Rescue in Wantagh including brushes, cat and dog toys, paper towels and pet shampoo. Student council members, under the direction of adviser Melissa Mignoli, made posters to hang throughout the school to raise awareness about the drive, which ended on March 26.

Fifth grader Sofia Thabet remembers going with her family to the shelter to get their dog, so she wants to bring happiness to animals there who are waiting to be adopted. James Jaskowiak’s family brought home a Labrador mix from a shelter about five years ago and recently adopted a poodle mix.

“Even though they’re in a shelter and don’t have a family yet,” James said. “We want to make them feel loved.”