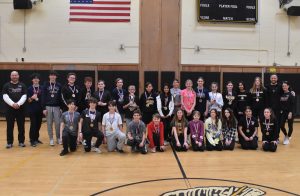 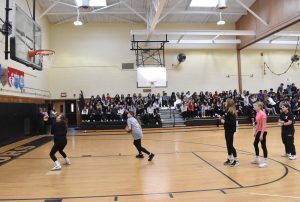 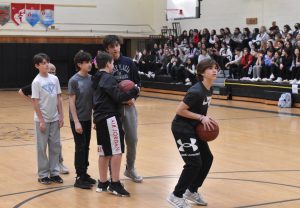 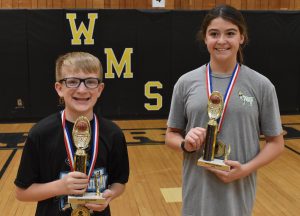 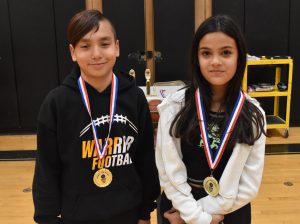 Students at Wantagh Middle School are all about heart health, whether it is getting exercise for themselves or raising money to help others.

This year, the school continued a long-standing fundraiser by participating in Hoops for Heart, to benefit the American Heart Association. Since 1996, Wantagh Middle School has raised more than $100,000 for the organization, including $2,278 this year.

Students took part in a “knockout” basketball tournament during physical education classes. In the game, participants in a group had to keep making baskets in order to eliminate other players. The class winners were invited to the finals in the gymnasium on March 11.

A total of 26 students from grades 6-8 competed, while the rest of the eighth grade came to spectate and cheer them on. Sixth grader Chris Eslinger emerged as the winner for the boys and seventh grader Charlize Marmol was the last one standing in the girls competition.

Before the tournament began, Nicholas Montagano and Eva Martinez were recognized as the school’s top fundraisers, each collecting more than $200 for the American Heart Association. Wantagh’s Hoops for Heart event was organized by physical education teachers Eileen Keener, Thomas Liguori and Gary Reh.

1: The winners of the “knockout” basketball competitions in physical education classes at Wantagh Middle School were invited to the schoolwide Hoops for Heart tournament on March 11.

2: At the girls hoop, students competed to be the schoolwide basketball champion.

3: Participants played an elimination-style game at the Hoops for Heart fundraiser.

4: Winners of the competition were Chris Eslinger and Charlize Marmol.

5: Nicholas Montagano and Eva Martinez were the school’s top fundraisers, leading the way in schoolwide donation of $2,278 for the American Heart Association.