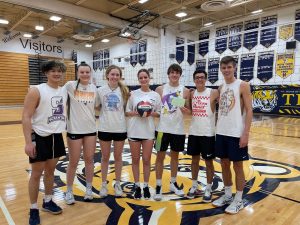 “This is a great collaboration between the Academy of Finance Program and local corporate sponsors, where we have unified for the greater good of our community to be able to provide an amazing event right here in Northport,” said Academy of Finance Coordinator Allison Schwabish.

This event has grown from just three corporate sponsors in 2017 to now hosting 12 corporations throughout Long Island.

“It’s exciting to see a homegrown tournament take off as this one has,” Schwabish added.

The money will be donated to help save lives and bring hope to those affected by suicide.

“We are also grateful to the physical education leaders, under the supervision of Aija Gipp and Sean Lynch, for their help in organizing a well-attended event,” Schwabish said.