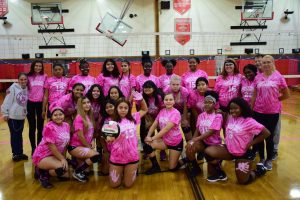 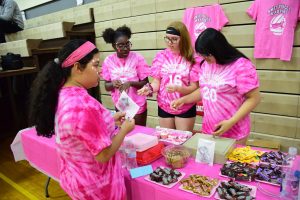 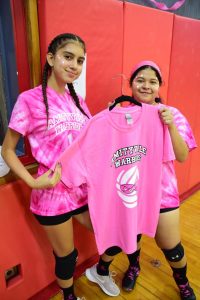 The girls varsity soccer team hosted its annual Kicks for Cancer Game on Oct. 2. Players baked together and then sold their goods during the Warriors’ contest against Southampton High School, raising about $700.

Amityville head coach Angela Steiger said that Kicks for Cancer is an initiative spearheaded by Hauppauge High School, and teams from all over Suffolk County participate and donate to the cause. Proceeds benefit several organizations dedicated to cancer research and providing comfort for patients.

On Oct. 11, the girls volleyball team held its Dig Pink game. Players from the varsity and junior varsity squads wore special pink shirts for their respective matches against Sayville High School. The court was also outlined in pink tape and pink streamers were hung throughout the gym.

To raise money, the girls sold Dig Pink T-shirts and baked goods, generating about $300. The funds were donated to Pink S.H.O.E.S., an Amityville-based charity that was founded by a pair of breast cancer survivors and Amityville Memorial High School graduates. The organization provides financial support to women undergoing treatment for breast cancer.

Senior Sabitha Joseph said it meant a lot to her and her teammates to take part in the Dig Pink game and raise money for an important cause.

“When you’re going through the worst thing in your life, the last thing you want to worry about is money for treatment,” Sabitha said. “If every team can contribute a little, it comes out to a big amount.”

3: The Warriors girls soccer team held its Kicks for Cancer game on Oct. 2.

4: Junior varsity volleyball players Luna Caicedo, left, and Stacy Pereira showed the special pink T-shirt that was sold to raise money for the cause.