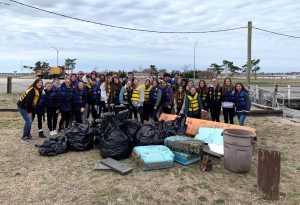 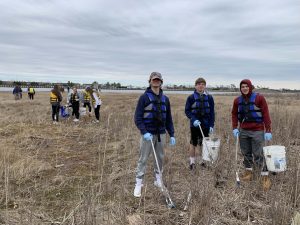 A group of students from Massapequa High School’s Ames Campus got a first-hand look at the environmental impacts of pollution when they went out on the water with Operation S.P.L.A.S.H. in early April.

More than 30 members of the Helping Hands Club, a student community service organization, joined the environmental group for a spring cleanup of the Great South Bay. The day began with a 40-minute lesson at the S.P.L.A.S.H. headquarters in Freeport about how pollution on Long Island over the past 50 years has negatively affected the environment, and future impacts if there is not a change.

Students suited up in lifejackets and work gloves, then got on a boat and took a short ride to an island in the bay. They got to work right away, with many students saying they could not believe how much trash was on just one little island. After filling up many garbage bags, along with collecting large items such as pieces of foam and crates, the ninth graders got back on the boat and traveled to a marina to properly dispose of the trash.

“I always want to help out when I can,” Colin Mushorn said. “The ocean is very important to me and it’s important to keep it clean.”

Colin said he was very impressed by the passion that Operation S.P.L.A.S.H members have for their environment.

Lindsey Black noted that this was her first time participating in a cleanup project of this magnitude. She said it opened her eyes to a real problem but also showed her how people can make a positive difference.

Advisers Alyssa Levine and Erin Mosier said the purpose of the trip was to educate students about how debris affects the ecosystems, how to prevent pollution and how they can make an impact in their own community.

“Living in Massapequa, many students go out on boats and down to the beach, so this is a project that has a big impact on their lives as residents of the South Shore,” Ms. Mosier said. “At the end of the day, students were thankful for the experience and said that they want to become more involved with Operation S.P.L.A.S.H. and cleaning up Long Island.”

1: The Helping Hands club at Massapequa High School’s Ames Campus collected several bags of garbage during a cleanup on the Great South Bay with Operation S.P.L.A.S.H.

2: Ninth graders picked up any trash they found on a small island in the Great South Bay.