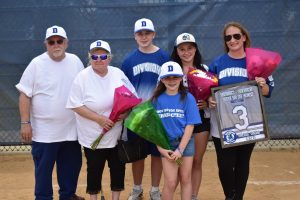 The softball field behind Division Avenue High School in Levittown was a sea of blue as players, coaches, district staff, members of the local community and the Verdi family celebrated the life of the late Michael Verdi, a former assistant coach of the softball team who the field is now named for after the May 22 dedication.

Verdi, who passed away in September 2019, was much more than just a coach to the students and staff of Levittown. He taught a range of English, journalism and literature  courses during his more-than-a-decade tenure in the district. He also advised more than 10 clubs and was deeply ingrained in all things Levittown. Several praised Verdi for his hard work and dedication during his time in Levittown at the new “Coach Verdi Field,” including former players Melanie Vespa from the Class of 2019 and Erin Cacciuttolo from the Class of 2020.

“There aren’t enough words to describe how amazing Mr. Verdi was,” Vespa said. “Anyone who had the pleasure to be around Verdi knew he was the definition of a person who constantly went above and beyond. Verdi always made the people around him instantly better.”

Captains Nicole Bowe and Vanesa Blanco presented a framed coach Verdi jersey to the Verdi family, and then it was revealed that, as of May 22, the number 3 will be retired in Verdi’s memory and will never be worn in Division Avenue softball again. The Verdi family was very thankful, and his daughter, Mikayla Verdi, eloquently expressed her gratitude.

“If my dad were here today he would want this message to be said,” she said. “My dad had a very different definition of winning than many other people in this world. He would say, ‘no matter the score on the board, or the medal you get, if you went out on the field and gave it your all and worked hard, you’ve won.”’

Photo caption: The Verdi family was presented with flowers and a framed jersey during the new “Coach Verdi Field” dedication.