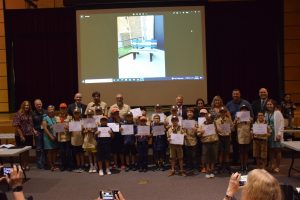 During the Bayport-Blue Point School District’s Board of Education meeting on Sept. 13, Cub Scout Troop 130 was recognized by the central administration and the district’s trustees for the gift of five benches placed at each of the elementary schools for the community to enjoy. The benches, a multi-year project, were made from 550 pounds of recycled bottle caps, which were collected by the troop’s 37 scouts. The scouts currently attend Academy Street Elementary, Blue Point Elementary and Sylvan Avenue Elementary schools and received a certificate of appreciation from each of the principals.

Photo caption: Cub Scout Troop 130 was recognized during the Sept. 13 meeting of the Bayport-Blue Point Board of Education for the crafting and dedication of five benches out of recycled bottle caps.