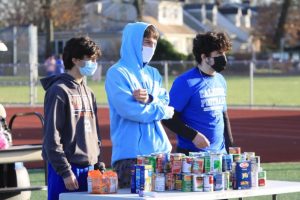 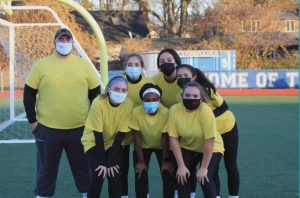 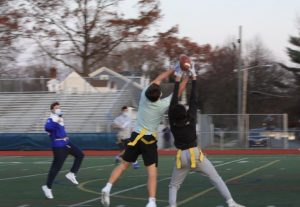 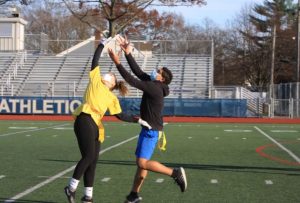 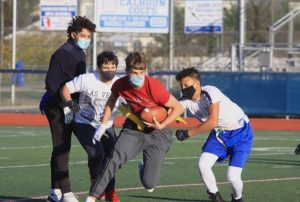 Although it’s a challenging school year for high school athletics, the football team at Sanford H. Calhoun in the Bellmore-Merrick Central School District decided to focus on something bigger than themselves.

The Colts banded together to assist local families struggling with hunger by organizing a flag football game on Nov. 24. The price of admission was food donations to the district’s food pantry, the Community Cupboard.

“Despite missing out on their sports seasons, taking classes in person and virtually, they never forgot that selfless attitude we try to instill in them every day,” said Coach Joseph Migliano. “When I brought up the idea all of our athletes jumped at the opportunity, not just to play a game but to help those who needed it most.”

The varsity squad split themselves into six teams of eight for a double-eliminations tournament.

Teams were guided by varsity leaders like Asher Carmen, Ryan Baci and Timothy Mack. Senior Nicole Devlin, the football team’s kicker, as well as a member of the soccer and track teams, served as managers alongside Sara Manson and Alex Unz.

“It was the best day of the year for me and my team so far,” Devlin added. “Not only did it bring our team closer, but it felt so amazing to see how we could come together to give back to our town. In such a hard time, it was so easy to help, and I know that this was just the beginning of the Calhoun Colts helping Bellmore-Merrick.”

The effort was made possible with support and assistance from Principal Nicole Hollings and Athletic Director Eric Caballero.

The team did more than bring the minimum; the football team with some help from the girls track and tield team collected more than 56 pounds of box and canned goods for the community.

“Our student-athletes from Calhoun know there is a light at the end of the tunnel and that they can still bring a community together without sports for now,” Migliano said. “The food raised will go on to feed countless local families over this holiday season and that’s something the boys and girls took a lot of pride in accomplishing. I feel really lucky to work with these kids, in this district that has overwhelmingly supported myself and the student athletes throughout these troubling times. While we were complaining about not playing football, there were families that didn’t know where their next meal was coming from.”