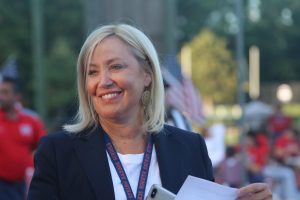 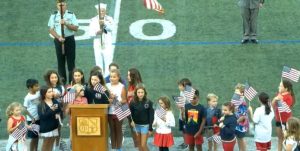 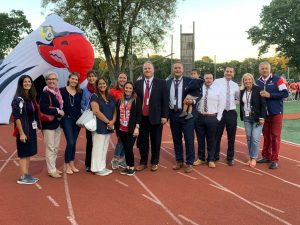 On Sept. 10, the Cold Spring Harbor Central School District officially began its football season with a special Sept. 11 Remembrance event honoring those lost and those who continue to risk their lives for the sake of others.

All Cold Spring Harbor community residents were invited to attend including active and retired members of the military, fire, police and first responders along with staff and students who lost a loved one as a result of the attack on Sept. 11. 2001. These groups were invited to participate in the ceremony held on the football field.

Superintendent of Schools Jill Gierasch opened the ceremony by welcoming those in attendance. “Thank you for coming to support our students and to pay tribute to our heroes on the 20th anniversary of the horrific Sept. 11 attack on American soil. Tonight, we respectfully recognize and honor our heroes, the brave members of the armed forces, our local fire and police departments, survivors and the loved ones we lost 20 years ago. We must let those who were lost know that Cold Spring Harbor holds them all close to our hearts and on this anniversary know they will not be forgotten. To show our strength and solidarity, we bring our community together to show our respect for our heroes and this great nation.”

The remembrance ceremony featured the district’s elementary students who carried American flags and recited the Pledge of Allegiance, followed by Cold Spring Harbor High School student Isabelle Apostolakos singing the national anthem and the varsity cheerleaders presenting a large American flag while representatives of the groups being honored gathered on the football field. Throughout the ceremony, the Brass Ensemble under the direction of Brent Chiarello played the “Hymn to the Fallen,” “Grand Old Flag,” “America the Beautiful” and “God Bless America.” Special thanks to the district’s Director of Technology Joseph Montasero for his touching closing remarks and for his invaluable assistance in organizing this memorable event.

The ceremony was followed by the first official game of the football season against the Seaford Vikings. While the outcome of the game was not what the Cold Spring Harbor fans were hoping for, everyone left with a greater sense of appreciation, patriotism and unity.