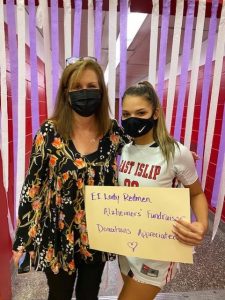 The East Islip High School varsity girls basketball team game on Dec. 16 proved a multifaceted event showcasing the program’s past and present glories as well as the team’s admirable efforts to give back to the community.

Captain Kamilah Pasha helped spearhead a fundraising effort by the team on behalf of the Alzheimer’s Foundation, which helped spread awareness and netted $600 for this worthy cause.

“Many of the players hadn’t seen each other in years, and it was truly a special time to celebrate and reconnect,” said current coach Mike Petre.

Finally, Petre inducted five new members from that 2001 team to the Lady Redmen Legends Club: Katie Burke, Patti Cronin, Christine Dorney, Jen McLoughlin and Rebecca Primm. All five players were highly decorated in their playing days and were the starters for the Long Island champions and 2001 state finalist team.