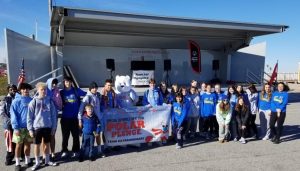 Four students from the Rocky Point School District were among the few dozen local students recognized for their participation in the Brookhaven Town Polar Plunge as part of Team ExtraOrdinary.

$13,000 for Special Olympics by getting sponsored to jump in the Long Island Sound in late November.

Team ExtraOrdinary started in 2013 when Robert Fitton started plunging with his cousin and one friend in honor of his brother who was born with Down syndrome, and from there, year after year, he has added friends to join the team. His sister, Mary, joined as a co-captain when she was old enough to plunge. The team is composed entirely of young people, and since inception, they have raised over $100,000 that has benefited over 250 Special Olympians and has grown on a yearly basis.