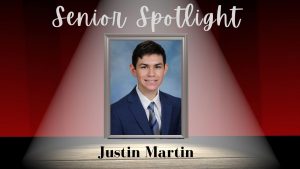 Justin Martin is a member of Garden City High School’s senior class who has made a lasting impression on the people who have had the good fortune of knowing and working with him; teachers, coaches and students alike. They praise his kind spirit and humble demeanor, along with academic and athletic successes.

Justin is described as a role model to his peers, eager to lend a helping hand and consistently thoughtful and respectful of others. He is known to be kind, considerate and creative, with a passion for animals, photography and computers.

When not immersed in his studies, Justin fulfills many after school responsibilities including but not limited to a job after school where he works as an office sales representative. In addition to his academic endeavors, Justin has accomplished meaningful recognition as an American Red Cross junior lifeguard and has served the community as a member of the Miracle Club. He has volunteered at the INN, where his most recent philanthropic efforts assisted in a food drive where they collected necessities for the less fortunate.

Justin’s athletic talents have been observed through his fencing accomplishments – he is a member of the high school’s team and successfully competed as a Foil Fencer. He is also a member of the United States Fencing Association.

He plans on attending Lynn University and pursuing a career that is fulfilling and meaningful.

Submissions are from staff, students, or parents. To nominate a GCHS senior, please contact Assistant Principal for Guidance and PPS Mandi Stefankiewicz at stefankiewiczm@gcufsd.net