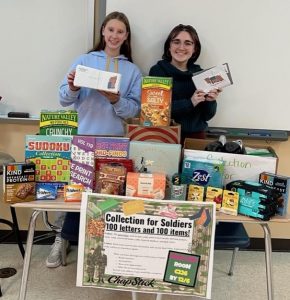 A simple idea can inspire others to think about it and motivate them to act. That is what happened when Shoreham-Wading River Class of 2025 sophomore vice president Emma Donnelly shared with her peers that she has a 19-year-old cousin who is stationed in Eastern Europe and thought it would be great opportunity to honor many overseas military members with some gifts from home.

Class adviser Kathrine Ziegler helped the students organize a school event to collect letters and items to send to soldiers for the holiday season. They set a goal of 100 letters and 100 items.

“We exceeded that goal in only one week,” Ms. Ziegler said. “We are sending just over 100 letters and over 230 items.”

The items were shipped out earlier this week with the hope that they make it to all the servicemen and women in time for the holidays.