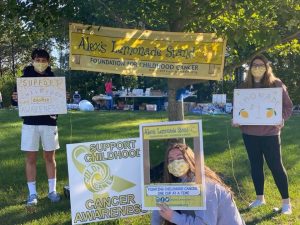 Working under the name the Golden Canes, the three have raised nearly $6,000 during the past two years for organizations including Alex’s Lemonade Stand Foundation and the Make-A-Wish Foundation.

“It has become more challenging with COVID,” said Anastasia. “Every day, we try to think of new ways that we can raise money.”

With social distancing guidelines in place, the students can’t be as interactive as they had been in the past. To adjust, they turned to social media, where they kicked off their September campaign for Childhood Cancer Awareness Month. Together, they started a tea fundraiser for Alex’s Lemonade Stand Foundation’s Million Mile 2000 where donors could pledge money for the Golden Canes to run, walk or bike. The effort proved fruitful, yielding $2,300 in pledges. The students also planned and held a socially distanced yard sale and lemonade stand, where they raised another $650.

The group aims to continue their philanthropic efforts this school year and beyond through a variety of fundraising campaigns, including the Macy’s Believe letter-writing campaign, in which Macy’s provides funding to Make-A-Wish for every letter to Santa that they receive. The students are also exploring ways to help the Ronald McDonald House.

The Golden Canes started their mission as eighth graders heading into their freshman year.

“We saw a lot of fundraisers happening and thought, what if we did something like that?” said Anastasia. “Knowing you are helping kids, even if it’s something as simple as a lunch, is a good feeling.”

The group chose to focus on childhood cancer awareness, as it is an issue near and dear to Anastasia’s heart. She is a six-year survivor of lymphoma, having been diagnosed at the age of 9.