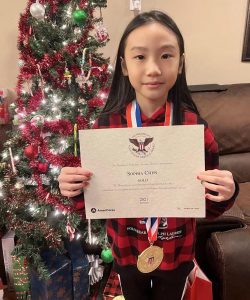 Searingtown School student Sophia Chen has been awarded the 2021 President’s Volunteer Service Award in recognition and appreciation of her commitment to volunteer service.

She has completed more than 75 hours by helping kindergarten students with their math and English language arts activities, as well as volunteering at events during summer camp and after school at the Long Island Tutoring Academy School. She is described as a kind, intelligent and loving student. In addition, Sophia and her brother Wilson joined a team of volunteers over winter break to pick up scattered trash around major roads in Herricks.

Sophia received her certificate and gold medal in December.