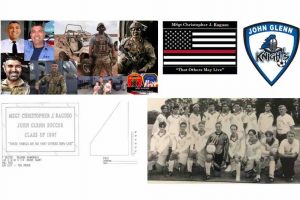 The Elwood-John Glenn Soccer Program is dedicating this upcoming 2018 season in honor of former player and American hero, MSgt Christopher Raguso (class of 1997).  Chris, a member of the Air National Guard’s 106th Air Rescue Wing, was one of seven servicemen that made the ultimate sacrifice when their helicopter went down on March 15th during a combat mission in Western Iraq while supporting coalition forces in Operation Inherent Resolve, the war against ISIS.  Chris was a treasured father, husband, son, and brother, as well as a 6-time decorated FDNY Lieutenant during his 13-year career at Engine 249/Ladder 113 in Brooklyn and Engine 302/Ladder 155 in Queens.  Lt Chris was also a 20-year volunteer with the Commack Fire Department, who dedicated his life to helping others.

The soccer program gathered financial support to help fund the memorial in honor of Chris to be dedicated on Saturday, September 22, 2018, after a varsity home game and before its annual alumni game.  All excess proceeds from their fundraising efforts will be donated to the Raguso family through the 39&One Foundation, started by Chris’s family, recognizing the 39 years and 1 day Chris was with us, either cherishing every moment with his friends and family or rescuing those that needed saving.  The memorial will be located alongside the scoreboard on the varsity soccer field, including a 25-foot flagpole flying all of the flags that Chris represented, as well as a plaque with his name and the saying, “These Things We Do, That Others May Live.” Additionally, all of the soccer program’s jerseys will feature an arm patch in his memory.

Chris’s legacy is that of the ultimate teammate.  The torch he carried in the name of sacrifice and service will burn eternally in the hearts and minds of those that knew him.  Hopefully, with your help in erecting this memorial, young men and women — the students of today and tomorrow — will learn of him and carry his torch forward by embracing all that he stood for.

At the Saturday, September 22, 2018, JV and Varsity soccer players along with the Middle School players will be volunteering their time to help set up, decorate, field donations and sell t-shirts all to help support the Raguso Family.

To learn more about their efforts please visit: https://www.gofundme.com/john-glenn-soccer-raguso-memorial