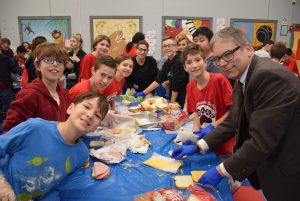 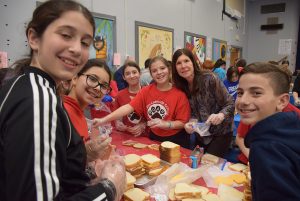 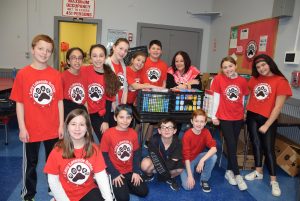 Once again, students, school staff members and administrators joined forces at Levy Lakeside School in Merrick to fight hunger. As part of a sixth grade service learning project, the school hosted the ninth annual Sandwichathon to benefit The River Fund’s mobile food pantry that helps dozens of New York City neighborhoods. Participants packed cold cut sandwiches and prepared packs of cookies in the school cafeteria –which at times resembled an assembly line– working together and hustling to prepare as many sandwiches as possible. In total they made 3,200 sandwiches! But it wasn’t just the sweat and manpower that they provided. Students and staff themselves donated cold cuts and bread. Local businesses also stepped up, particularly A&S Fine Foods of Merrick, Hey!cookie of Jericho, Prime Fine Catering of Garden City, Spiga Bakery of Bellmore, Stop & Shop of Merrick, and Wonder Bread.  According to sixth grade teacher and project coordinator Susan Molloy, a single Lakeside student came up with idea for the Sandwichathon several years ago because she wanted to do something special for the homeless on her birthday. Other Lakeside students heard about her idea and were inspired to help out, leading to a tradition that has fed thousands of homeless people.  “Each year the effort grows and donations keep coming in,” Molloy said.  “The kids and adults alike enjoy lending a helping hand to provide meals to so many people who might otherwise go days without something to eat. It makes the children feel good knowing they are making a difference in someone else’s life.”