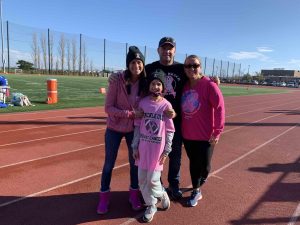 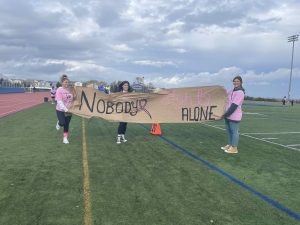 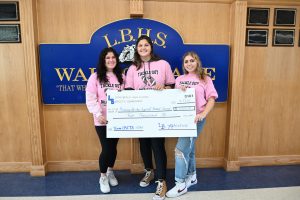 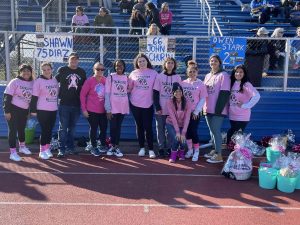 Hailey, Daniella and Isabella spent more than a month developing their plan for the Oct. 30 game. They sold t-shirts, which Hailey designed, in the commons and through order forms leading up to the event, and also obtained raffle basket donations from local stores. The students promoted their initiative on social media and around the school, thanks to support from parents and staff members.

Inspired by conversations with her mother, Hailey suggested the student-organized Pink Out event to her two peers, both of whom serve as football team managers and embraced the chance to make a difference. Isabella experienced the impact of breast cancer first hand when her mother was diagnosed, and the trio brought their idea to Guidance Counselor Amy Leder, who serves as LBCTA Secondary Vice President, and Director of Health, Physical Education and Athletics Arnold Epstein.

Each year, Ms. Leder coordinates a Pink Out initiative that raises funds on behalf of Team LBCTA 11561 for the Making Strides Against Breast Cancer walk at Jones Beach. Faculty members supported this year’s efforts through sales of t-shirts and hats, as well as building-level fundraisers. While the walk was held on Oct. 17, donations are accepted until December.

“I thought it was crazy how much three girls from LBHS could accomplish with just a little motivation and pink t-shirts,” Hailey said. “I think it was really cool, the impact that we now know that we made on so many people by doing this.”

“It definitely meant a lot to me given that my mom was diagnosed and other family members have been too, and that really just opened my eyes up to the whole fundraiser,” Isabella said. “The point was to raise as much as we could, get as much awareness out there as possible and help the teacher’s association.”

“Just spreading awareness on this topic and being able to donate and give money knowing you can help is such a good feeling,” Daniella said. “Turning it into a huge event where everybody is supporting everyone who has either been through it or seen it is just a really good connection to make with each other.”

Isabella plans to continue the initiative next year as a senior, and in the meantime, the students are exploring possibilities for fundraisers during other sports seasons.

“As an association its extremely important that we give back to organizations that support our community,” Ms. Leder said. “It was incredible to partner with these young women and watch them bring this event to their classmates and community. We are so proud to contribute to the Making Strides Against Breast Cancer event and hope to see the students’ efforts continue on, as a legacy.”

3-5: The students and faculty members teamed up to raise funds for the American Cancer Society.