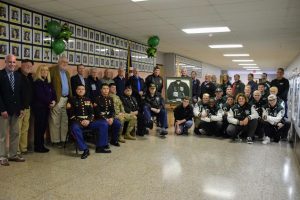 In July 1964, Robert joined the U.S. Marine Corp and was assigned to the supply company of the 3rd service Battalion in Da Nang. On March 24, 1966, only two years after his graduation, Robert was killed on a resupply mission when he was hit by sniper fire.

Years later, Robert’s father, Henry Dorner, gave his son’s class football jacket to his childhood friend and neighbor Kevin Fowler. In September, Kevin brought the jacket back to Lindenhurst High School and left it in the care of security guard Bob Cropsey in hopes that the school would honor the memory of the fallen veteran and Lindenhurst alumnus.

Mr. Cropsey took it upon himself to organize a small ceremony at the high school where Robert’s varsity jacket was framed by the Lindenhurst Football Alumni Association and presented to members of the district’s administration including Superintendent of Schools Daniel E. Giordano, High School Principal Dr. Candice Brodie and Director of Health, Athletics and Physical Education Anthony Amesti.

“We can learn from his experience lessons of bravery, determination and courage,” wrote Edward Curry, Lindenhurst High School student and editor of the school paper. “From a small-town boy to a lost memory in Lindenhurst’s history, Robert shall not be forgotten.”

Photo caption: The memory of U.S. veteran Robert Dorner, a graduate of the Lindenhurst High School Class of 1964, was recognized during a small ceremony held on Nov. 8.