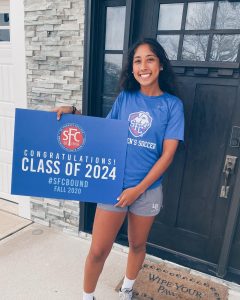 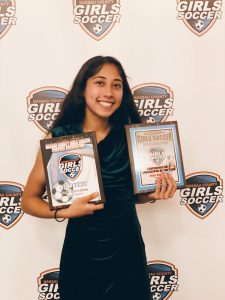 Sage has participated on four varsity teams, including the two-time Conference Champion soccer team, on which she has made an especially powerful impact. She served as a four-year starter and two-year captain, was named MVP as a sophomore and earned All-Conference, All-County and Conference Goalkeeper of the Year accolades. In addition to her soccer success, Sage has competed on the basketball, lacrosse and track and field teams and has earned Scholar Athlete Awards for all sports since her freshman year.

Outside of school, Sage has played club soccer on the Albertson Fury National Premier League and Massapequa Lil Rowdies Elite Developmental Program Soccer League, the latter of which was named NY State Cup Finalist in 2019.

Sage is actively involved in the high school’s Athletes Helping Athletes club and recently coordinated a project that prepares fifth graders for middle school. She has also volunteered her time at the Martin Luther King Center, helping children in the community with their schoolwork and serving as a mentor.

With skills that extend beyond the field and classroom, Sage is fluent in Spanish, knows the basics of American Sign Language and plays the violin and Ukulele. She will be attending St. Francis College, where she will continue her soccer involvement.