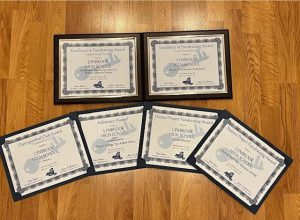 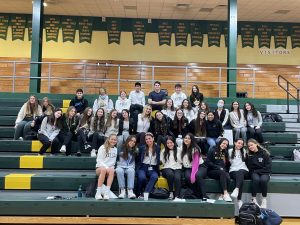 The Key Club at Lynbrook High School in the Lynbrook Public School District received numerous awards for their accomplishments over the past year during the virtual Leadership Training Conference from March 25 to 27. The club has raised over $54,000 for many charities and has saved hundreds of lives through its three blood drives.

Lynbrook Key Club’s annual Double Good popcorn fundraiser was one of their most accomplished events of the year and raised $30,000 for multiple charities. This event scored Lynbrook the Excellence in Fundraising award, which acknowledged the Lynbrook Key Club for holding the largest single project. The Key Club was also awarded the Distinguished Club Award at the Diamond Level, which they have won for the second year in a row.

“I am thrilled about what Key Club was able to accomplish this year, especially the effort put into our two popcorn fundraisers, and three blood drives,” co-president Sophie Ward said.

“Our members stepped it up and had a successful year,” Dr. Benedict Tieniber, the Key Club’s adviser, said. “We received the highest award at the conference: Distinguished Club Diamond Level. This honor demonstrates Lynbrook Key Club as one of the model Key Clubs in all of New York State. I am extremely proud of this group.”

This service year is ending on a bittersweet note, as Key Club members are sad to say goodbye to their co-presidents Sophie and Emma Ward, but excited to welcome its new board.

“We helped so many people this year, and that’s all because of each club member’s dedication to Key Club,” Emma said. “I’m definitely sad to leave because I have loved leading Key Club this year, but I am also confident that next year’s Key Club will continue to succeed.”

Throughout the year, the Key Club has held many donation drives, including food, clothing, toy, and book drives. These charity events are what helped the club win the Advocacy Award, which recognizes their exceptional support and promotion of specific causes. Along with these awards, Key Club also won the District Project Fundraising Award also for the Double Good fundraising event.

As the service year wraps up, the Wards left a final message to all the new board members: “Key Club has the ability to make a very large difference in many people’s lives; not just people in the community, but also strangers all over the country. Take a second to reflect on how many people you are helping, and it makes all the hard work worth it. It is important to channel your passion for helping others into all the Key Club events you participate in. Also, to remember that any money raised, no matter the amount, will help to make a difference in someone else’s life!”