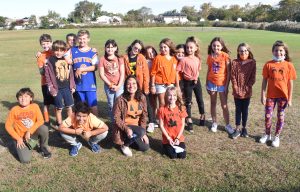 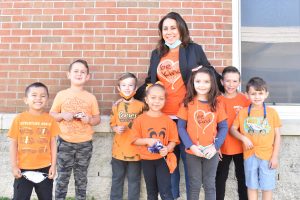 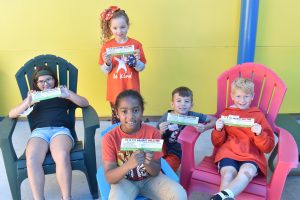 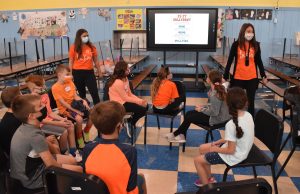 Kindness was the message at Mandalay Elementary School in the Wantagh School District on Oct. 20, which took part in the national Unity Day initiative. Students and staff showed their solidarity by wearing orange.

Unity Day is sponsored by PACER’s National Bullying Prevention Center and the purpose is to send a visible message that no child should ever experience bullying. Psychologist Marie Maleganos and guidance counselor Donna Shulman hosted grade-level workshops in the cafeteria for students in second through fifth grade, with an emphasis on acceptance, kindness and inclusion.

The discussions began with an opening question, “What is bullying?” From there, Ms. Maleganos and Ms. Shulman engaged students in conversation about the ways they can make positive connections with their peers. Children then split into smaller groups, each facilitated by a staff member, to review common bullying scenarios and what should be done in each instance.

Ms. Maleganos and Ms. Shulman explained that the purpose was to give students the strategies they need to handle different situations, including when to turn to an adult. They identified the trusted adults at Mandalay and in their lives. As they are living in a very technological world, cyberbullying and social media safety were also discussed.

To wrap up their sessions, each student wrote a kindness message on an orange strip of paper, which were then turned into Unity Day chains.

Several activities also took place in classrooms. Teacher Kelsey Davidson read her students “Spookley the Square Pumpkin,” which has an important message about accepting others for their differences. Students also signed “Be a Kid Against Bullying” pledges.

Principal Marie Pisicchio said that workshops and activities imparted important life skills, like how to resolve problems peacefully. She noted the meaningful message of Unity Day and hopes it inspires Mandalay students to always do what’s right and to stand up for one another.

1: Mandalay Elementary School Principal Marie Pisicchio was joined by first graders who wore orange on Unity Day on Oct. 20 to show that they stand together against bullying.

2: Third graders shared their kindness messages which would then be linked together to make paper chains.

3: Fourth graders filled their wardrobes with orange as a visual reminder of acceptance, kindness and inclusion.

4: Students throughout the school, including third graders in Stacey Wright’s class, signed “Be a Kid Against Bullying” pledges.