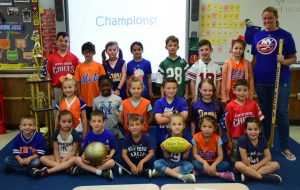 For Melanie Kane’s first grade students at McKenna Elementary School in the Massapequa School District, helping others is a way of life. Her class was declared food drive champions for their generosity during four sports-themed food collections this year.

It started in the fall with the baseball themed “World Cereal” challenge, followed by the “Souper Bowl,” the “March Madness” peanut butter and jelly and challenge and finally the “Stanley Cupboard” drive for non-perishable food items. Ms. Kane’s students collectively donated more food than any other class at McKenna in all four food drives.

Ms. Kane said that the competition for each trophy gets the children excited, which translates into more donations. Items go to local food pantries. Since the first “Souper Bowl” collection in 2014, Ms. Kane’s class has won five years out of six.

“We get a little competitive,” she said, “but it’s all for a good cause.”

Photo caption: Melanie Kane’s first grade class had the most donations in each of four separate food drives this year at McKenna Elementary School.