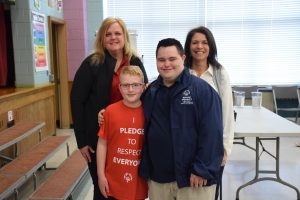 A recent student-led service-learning project at Merrimac Elementary School in the Sachem Central School District helped raise money for an incredible cause, as students across grade levels rallied together to collect money for the Special Olympics.

Fourth-grade student Gabriel Nagel developed a plan to raise money for the Special Olympics and brought his idea to Building Principal Veronica DeCicco to make it a reality. Gabriel held a coin drive where students donated spare change, and he also organized a kickball tournament with various incentives for the winning team.

To conclude the assembly, John answered questions prepared by the students and presented Gabriel with his own special socks.

Photo caption: Students across grade levels at Merrimac Elementary School recently rallied together to collect money for the Special Olympics.