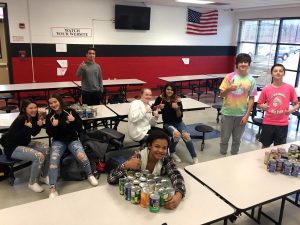 To commemorate the league’s 100th season, the National Football League teamed up with DoSomething.org to invite fans, players, clubs and employees to join Huddle for 100, an effort to inspire a million people to volunteer 100 minutes of their time to make meaningful contributions to their communities. East Islip Middle School’s Leaders Club took on the challenge with a Huddle Against Hunger food drive for the homeless.

“I often to look to DoSomething.org for inspiration for our club initiatives and fundraisers,” said club adviser Laura O’Donnell. “The website focuses on what our youth can do to be inspiring role models, to support their communities, to live healthy lifestyles and to foster respect for one another, and that’s what our Leaders Club is all about.”

For a month, middle school students and staff joined club members in collecting 159 healthy nonperishable food items to help support their community, which were then delivered to the Parish of St. Mary’s in East Islip.