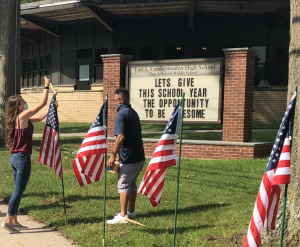 Members of the Port Jefferson School District Varsity Club helped to put out American flags on Sept. 11 in front of the district’s Armed Forces Tribute to honor those who perished in the 2001 attacks on the World Trade Center, Pentagon and aboard Flight 93.

Along with advisers, teachers Jesse Rosen and Deirdre Filippi, the students continue to engage in community and service-minded projects. The district thanks students Massimo Cipriano, Brady DeWitt, Lucy DeWitt, Luke Filippi, Ryan Filippi, James Gruenfelder, Hailey Hearney and Grace Keegan for their efforts in continuing to establish a sense of community and creating a positive influence with their peers.

The flags surround the district’s brick placard that sends a positive message of strength and unity for the school year.