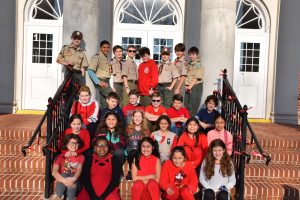 The Andrew’s Day memorial was led by several Pulaski Street students who were all Boy Scouts with McMorris. Among them was fifth grader Liam Sherman, who brought the idea to his teacher, Stacy Hubbard.

In planning for the memorial, Sherman wrote a speech about his friend’s hopes, dreams and accomplishments, which he read to his peers over the school’s PA system on Jan. 13.

Sherman, along with his classmates, also made red ribbons for all students in the school to wear and placed red ribbons in and around the school in memory of McMorris.

The school plans to continue to honor McMorris’ memory by donating to the Andrew Rocks fund, which raises money for causes in Andrew’s name. Funding will be provided through the school’s Tuesday Positive Shirt Day initiative, in which staff and students offer donations in exchange for wearing shirts with positive messages.