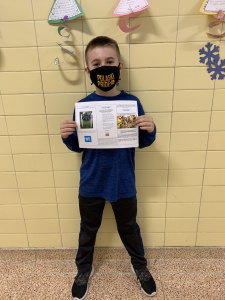 Pulaski Road fourth grader James Siragusa is using his creativity for a good cause. As a member of the school’s SHARE Club, James created a trifold flyer to explain the goals of the club’s initiative to purchase a goat for the Heifer Foundation.

The SHARE Club, which stands for “Students Helping and Relating to Each Other,” started the initiative with the Heifer Foundation to support fellow students who suffer from poverty and hunger. Purchasing a goat for a family around the world can help them create a sustainable income. To support this initiative, James took it upon himself to create a trifold flyer outlining the goals of the initiative. In addition to this, he created a joke book comprised of student-submitted jokes, which he is selling for 50 cents. Profits will be used to the support the purchase of the goat.

The club is led by elementary counselor James Durand and fifth grade teacher David Kaiser. When describing James, Mr. Durand said he is “a wonderful student who works really hard.” He added that “this initiative could have a big impact on a family, and it’s great to see a student finding creative ways to make it successful.”