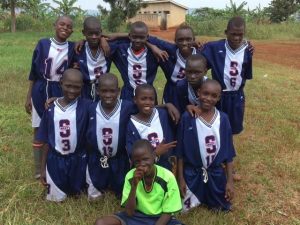 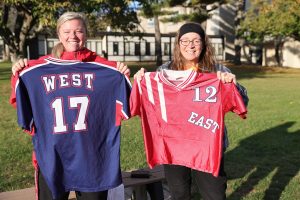 Smithtown High School West teacher Kimberly Williams wanted her marine science students to experience a personal connection to reducing consumption and waste as well as to leaving the environment a better place.

“We had been collecting gently used school supplies as well as lost and found items during locker cleanout week each June,” Williams recalled. “We donated gently used items to the Family Service League as well as needy families in Smithtown.”

One of the bags included sports gear. And that spurred what has evolved into an international effort to help the needy.

“I immediately called my sister, Carolyn Ferguson, a physical education teacher at South Side Middle School in Rockville Centre, to see if she knew of any groups who might need them,” Williams said about the initial sports gear. “Our district’s Physical Education Coordinator Pat Smith also allowed me to give some old uniforms to Carolyn. She then delivered them to her assistant superintendent, who would bring them over with her when she volunteered in countries where the items were so scarce and the children were in need. Those sports items flowed all the way to Uganda.”

When the endeavor generated media attention, Carisa Eye, a Smithtown graduate who was teaching and coaching out of state at the time, learned about the philanthropy effort and volunteered to help by donating uniforms and gear she brought with her as she returned to Long Island. She filled her car as she moved back to Smithtown.

Fast forward to present day, and Eye — a lacrosse and field hockey coach as well as teacher in the district — continues to pitch in alongside Williams. This week, more gently used sports gear was passed along from Eye to Williams for international distribution.

Smith, now the district’s athletic director, continues to ensure that when there is any gently used sports-related item that has some life remaining, it becomes available to be shared with those in need.

The group has now partnered with Samba 360, whose mission is to provide relief to disadvantaged children, both domestically and abroad, through the collection of donated sporting and other recreational equipment.

“We always look forward to hearing the stories of the friends we’ve made across the miles, the ways our students and staff have helped keep extra items out of the waste stream, and the good our gear is doing,” Williams said. “We hope to keep this ‘current of kindness’ flows for a long, long time.”