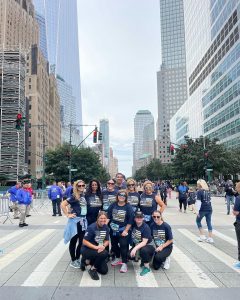 On Sept. 25, a group of teachers from Sagamore Middle School in the Sachem Central School District participated in the Tunnel to Towers 5K. The event symbolized New York City firefighter Stephen Siller’s final footsteps from the entrance of the Brooklyn Battery Tunnel to the Twin Towers while paying homage to the firefighters, law enforcement officers and civilians who lost their lives on Sept. 11, 2001.

Not only did 10 Sagamore teachers participate in the race, the team raised more than $6,000 ahead of the event to honor U.S. military members and first responders.