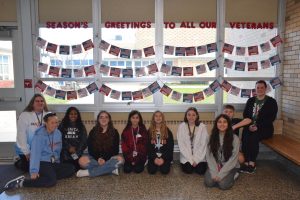 Members of the Sagamore Cares Community Service Club in the Sachem Central School District are wishing veterans a happy holiday season. Throughout the month of November, Sagamore Middle School students sold flags to their peers and teachers during lunch periods. Those who purchased flags wrote down a name of a veteran they know, as well as their branch of service. The flags were then hung in one of Sagamore’s main hallways for all to see.

The club raised $150 through selling flags, which will be donated to a local veterans home. While the project started around Veterans Day, it has continued into December and the season of giving.