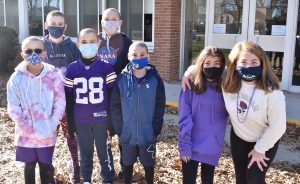 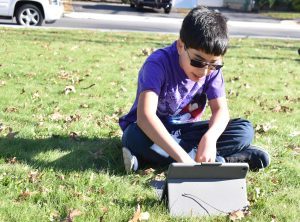 Carsyn Volpe has made a lot of friends during his seven years as a student at Saw Mill Road Elementary School in the North Bellmore School District. Now, his friends are doing their part to lift his spirits as he battles cancer for the second time.

Sixth graders wore purple to school on Nov. 24, which was “Courage for Carsyn” day. They decided to pick a color to show unity in their support, and Carsyn chose purple as the color he wanted to see his peers wear.

Carsyn was diagnosed with neuroblastoma, a rare form of childhood cancer, as a 2 year old and was cancer-free after a year and a half of treatment. Recently, he learned that it returned. Because Carsyn shaved his head prior to the start of chemotherapy, more than a dozen students did so as well. Even a few girls joined in by cutting off a few inches of hair.

Jimmy Lewis, who has known Carsyn since first grade, was one of the students who sported the new look. He described Carsyn as a genuinely nice person who is a wonderful friend and has a great personality.

“He’s going through a really tough time and we want to help him feel better,” Jimmy said. “We want to put a smile on his face.”

That smile could come from the Flipgrid videos that all sixth graders made on Nov. 24. They recorded personal messages of support and encouragement for Carsyn, spreading out on the expansive lawn with their iPads. Students practiced social distancing so they could remove their masks, so Carsyn could see his friends’ faces and clearly hear their voices as they sent their well-wishes.

Principal Jeff Rosof said he is very proud of how the sixth grade students and teachers stepped up to support Carsyn and that this is another example of how the Saw Mill Road community is caring and compassionate.

“Hopefully their efforts can give Carsyn some strength for the battle ahead,” Mr. Rosof said. “We wish him the best.”

1: Several sixth graders at Saw Mill Road Elementary School shaved their heads or cut their hair in support of classmate Carsyn Volpe who is battling cancer.