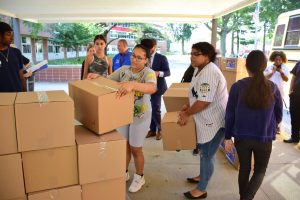 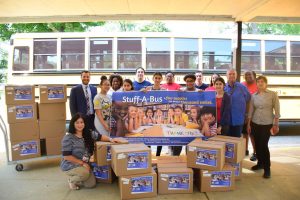 Boxes and boxes of school supplies were delivered to Edmund W. Miles Middle School in the Amityville Union Free School District on Sept. 11 thanks to the United Way’s Stuff-A-Bus program. United Way chose the date to coincide with the National Day of Service.

Shortly after 10:30 a.m., a big yellow school bus pulled up, provided by Educational Bus Transportation, one of the district’s transportation providers. United Way volunteers emerged and unloaded dozens of boxes. Members of the middle school’s Students Against Destructive Decisions club also helped out.

“We want children to have the best start to the school year so they can be successful,” she said.

Middle school social worker Beatriz Offitto said that this year was the first time Amityville participated in Stuff-A-Bus. She said that the donations will be provided to any child in need of supplies, and also will be given out to new students enrolling at the school. After the items were sorted by students from the SADD club, supplies more appropriate for younger students were delivered to Park Avenue Memorial Elementary School.

“I’m excited that we are able to help students by giving them supplies, to make their learning easier,” Ms. Offitto said. “Having good school supplies makes their educational experiences better.”

1: Volunteers from United Way dropped off school supplies at Edmund W. Miles Middle School on Sept. 11 through the Stuff-A-Bus program.

2: Students from the middle school’s SADD Club helped unload boxes from the bus, and later sorted the supplies.