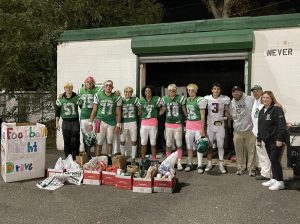 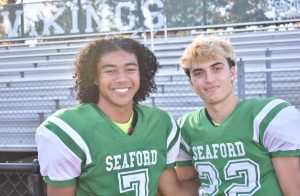 It wasn’t just a team effort, it was a teams effort, to fill several large boxes with food at the final regular season football game of the year for the Seaford Vikings. Students on the varsity team, the cheerleading squad and the opposing football team, the Clarke Rams, all contributed to a food drive for Island Harvest on Oct. 28. Fans were also encouraged to donate nonperishable items, with boxes placed at the entrance to the stands.

Michael Corcoran said that one of his initiatives since taking over as Seaford’s head coach two seasons ago has been getting his players involved in community service. He said that by developing a service mindset at a young age, they are more likely to maintain a giving spirit as adults. The team decided to do the food drive at the last home game of the year because it was the closest to Thanksgiving.

“It’s something that we’ll definitely try to do again next year,” he said of the food drive, noting the large amount of donations received this year. “It’s very important to be community minded and it’s something that Seaford does very well.”

For their efforts in helping to make the food drive a success, Coach Corcoran thanked the president of the Seaford Booster Club, Bridget Ulzheimer, head coach of the varsity cheerleading team, Lisa Ferrari, and head coach of the Clarke team, Kevin O’Hagan, who is also a Seaford resident.

Seaford senior football players Ryan Baldwin and T.J. Harrington said that everyone on the team pitched in by donating food. By partnering with their opponents to help those in need, they showed how some things are bigger than sports.

Added Ryan, “It’s very important to help our community. We’re the faces of it. It’s good to represent Seaford pride.”

1: The Seaford Vikings varsity football team held a food drive for Island Harvest during the last regular season home game on Oct. 28 in partnership with their opponents, the Clarke Rams.