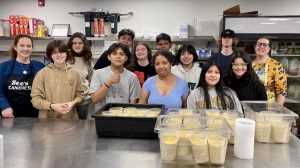 The Kiwanis kicked off the project earlier this year by partnering with 50 volunteers to meet a pledge of 1,000 quarts of soup for the nonprofit Heart of the Hamptons. With the Key Club’s help, they came close to their goal with a total of 820 quarts.

The effort was overseen by Southampton Kiwanis Club chapter members Scott Wilson and Jamison Wilson and previous Southampton Kiwanis President Rachel Foster. It was spearheaded by chapter member Delaney Oser, who is chef/owner of Thyme & Again Catering. The initiative’s aim was to feed the portion of the community affected by food insecurity while bringing together a group of volunteers.