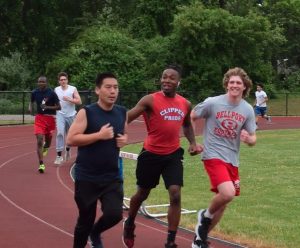 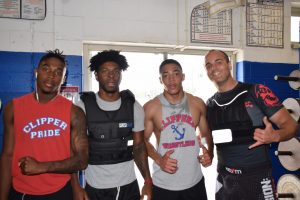 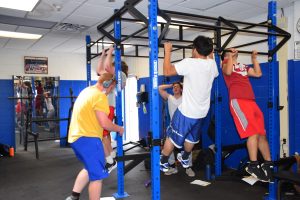 Lt. Michael Patrick Murphy was a U.S. Navy Seal officer and the first recipient of the Congressional Medal of Honor since the Vietnam War for his actions in the War in Afghanistan. He was born and raised in Suffolk County and after participating in several War on Terrorism missions, was killed in 2005 after his team was surrounded by Taliban forces. While in the Navy, he discovered CrossFit, creating his own CrossFit-style workout that involved running, pushing, pulling and lifting. The annual Murph Challenge has evolved into a workout that pays tribute to Lt. Murphy and to all fallen heroes.

Social studies teacher Joe Scioli, who started and runs the program at Bellport High School, said the event puts the actions of a local hero in perspective. “This challenge is a good way to make Memorial Day relevant to our students,” he said.

Class of 2020 graduate and student-athlete Joshua Leidig said he has participated in the event each year as a way to honor fallen heroes and the contributions of Lt. Murphy, calling the workout a tradition. Shaun Bolton, also a participant, described the event as a “bond that can’t be broken.”

A: Bellport High School substitute teacher Vincent Walsh, and students Andrew Beadle and Calvin Pedatella cheered each other on during the Lt. Michael P. Murphy Murph Challenge held prior to Memorial Day weekend.