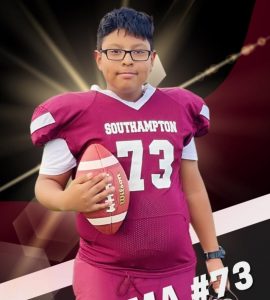 When Southampton Intermediate School seventh grade life skills student Samuel Arevalo Sangurima joined the Southampton Junior High football team season this fall, no one knew the lasting impact that he would have on his teammates and coaches. It was such an impact that his teammates collaborated with players from Greenport to make his last game of the season a memorable one.

“We wanted to do something memorable for Samuel since he attends every practice with a smile and willingness to participate,” said coach Matthew Babb. “Although we always make sure to get him in each game, usually on defense only, we wanted to give him that truly special moment and let him know that he belongs.”

That memorable moment came on Oct. 26. Greenport had the ball with a minute and a half left in the game and, as agreed prior to the game between coaches, players and officials, Greenport “fumbled” on the next play and Southampton picked it up with officials immediately blowing the play dead. This set up what would become Samuel’s memorable 50-yard touchdown run, with Greenport running “attempted diving tackles” as Samuel made his way down the field.

“He was extremely happy after,” said Babb, adding that Sangurima truly made this year’s season memorable for all. “The team fully supported him during every practice without any prompting from the coaches,” he said.

The season was Sangurima’s first and his experience has led him to join other clubs at his school, including the Community Club, Woodworking Club and Yearbook Club.