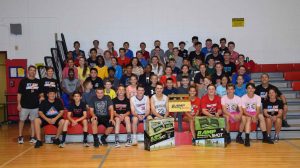 After contributing a $15 donation per player, students and their teammates were able to engage in fun and friendly competition in the school’s gymnasium for a few hours. Dozens of students put their skills to the test as they played the popular backyard game, which was created by Josh Bonventre and Kevin Texeira, both of Long Island. As a result of the fundraiser, the students raised $1,000 to support the cause.

Student-winners of the competition went home with gift cards, and their very own “Ramp Shot” game to enjoy on summer vacation. The district would like to thank staff members Justin Hertz, Brianne Hertz and Chris D’Andrea for once again organizing the fun and exciting tournament.