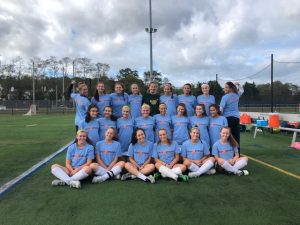 Ward Melville High School student-athletes are rallying together to help raise funds and awareness for a worthy cause – the Dezy Strong Foundation.

The organization was created by Long Island native Matt DiStefano, who recently spoke with Ward Melville’s athletes and coaches about his struggles with fighting cancer and his new outlook on life and decisions.  During the workshop, Mr. DiStefano explained how he is working to face this diagnosis with a positive outlook, rather than becoming consumed with the question “why me?”

“We felt like bringing Matt in to speak about his trials and tribulations, as well as his Dezy Strong Foundation, that it would be a great motivator for our student athletes to recognize how lucky they are that ‘they get to’ (the motto of his foundation),” said  field hockey coach Shannon Sioss who coordinated the workshop. “So often when we are faced with setbacks or tough news, we give up and question ‘why me?’ and Matt is a true example of facing the challenge head on while maintaining the never give up mentality and motivating all those around him at the same time. He is a true inspiration to us all!”

Following the talk, several teams rallied to raise donations for the foundation and similar causes. The field hockey team has raised $1,000 this season which will be split between the “Play for a Cure” foundation as well as the Dezy Strong Foundation – both organizations are geared toward fighting cancer and helping those affected by this extremely tough disease. The boys volleyball team is continuing to raise money to contribute to the Dezy Strong Foundation and the boys basketball program will be hosting special fundraisers during their Nov. 23 games.