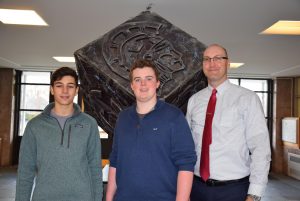 Congratulations to Garden City High School students Adam Hadjipateras and Timmy O’Hanlon who were recently honored with the Prudential Spirit of Community Award, a nationwide youth volunteer recognition award sponsored by Prudential Financial in partnership with the National Association of Secondary School Principals.

Adam is honored as the co-founder of the not-for-profit company Midas https://the-midas-t.myshopify.com/. He and his partner Liliana Papachristos created clothing and apparel which was sold at different festivals to raise funds for charity. This included supporting the Henry Viscardi School for children with disabilities and The Home Project, a nonprofit organization set up to address the needs of refugee children who arrive in Greece.

Timmy is honored for organizing basketball fundraisers, including the Challenger League Basketball tournament which brings players of all abilities together on the court for fun, spirited action. In conjunction with this, he also organized bake sales and raffles to support the Long Island chapter of the Leukemia & Lymphoma Society. Timmy was inspired to raise funds for the organization in memory of Garden City High School graduate Bobby Menges, who lost his battle with cancer in 2017.

As local honorees Adam and Timmy are now in the running to be named Prudential Spirit of Community Honorees for New York State. Prudential will announce New York State’s top youth volunteers of the year on Feb. 4.

The Prudential Spirit of Community Awards represents America’s largest youth recognition program based exclusively on volunteer service. Since 1995, the program has honored more than 130,000 youth volunteers at the local, state and national levels.