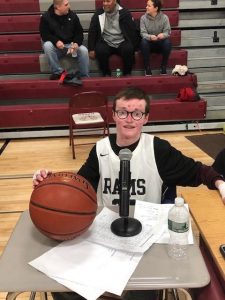 Robbie Twible, a senior at W.T. Clarke High School in the East Meadow School District, got the surprise of a lifetime at the Dec. 13 varsity basketball game when he got his chance to join his school’s team on the court.

Robbie loves basketball and has been the announcer for the W.T. Clarke varsity team for the last three seasons. Due to a rare skin disorder known as epidermolysis bullosa, Robbie has never been able to play the sport he loves — until the evening of Dec. 13.

As he was announcing the game against East Rockaway, Robbie unexpectedly read his own name and number at the end of the roster. Thanks to a coordinated surprise among the W.T. Clarke and East Rockaway teams, as well as Robbie’s parents, Robbie finally got his chance on the court. He ran out to join the team he supported for so long and was finally able to participate in the sport he loved.

Clarke gained possession in the tipoff and passed the ball to Robbie. He made a layup and was officially solidified in the books as a member of the varsity basketball team. After his scoring basket, Robbie went back to announce the game for the crowd of supporters.

The district would like to extend a special thank you to all those who helped to coordinate the surprise, especially W.T. Clarke Athletic Director Josh Friedman.

Photo caption: Robbie Twible, a senior at W.T. Clarke High School who has a rare skin disorder, finally got his chance on the basketball court during the school’s game against East Rockaway on Dec. 13.