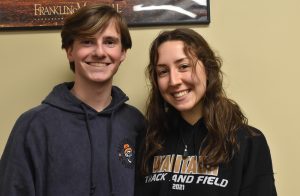 After raising more than $110,000 in 2021 for the Leukemia and Lymphoma Society, the Warriors for a Cure team is determined for another big year. Two of the team leaders, Skyla Marchesi and Joey Labo, are seniors at Wantagh High School and say they are well on their way to meeting and hopefully eclipsing this year’s fundraising goal.

Every year, the Leukemia and Lymphoma Society hosts the Students of the Year campaign, a philanthropic leadership development program for high school students. Participants grow their professional skill set such as entrepreneurship, marketing and project management while raising important funds in the fight against cancer.

“Cancer is something that affects everyone,” Joey said, adding that most people know someone who has battled the disease.

His reason for participation in the fundraiser is to help people battling cancer now and to help future generations. Money raised provides treatment to cancer patients and supports research.

Skyla and Joey, along with a third team leader from Sacred Heart Academy, set this year’s fundraising goal at $90,000 for the seven-week competition. There are 15 students on the team, about half from Wantagh High School.

The team is fundraising through several different methods. Warriors for a Cure has placed coin donation jars at several local businesses. They have received gift cards and gift baskets from restaurants and stores to raffle off. All team members also have personalized fundraising webpages in which friends and family can make contributions.

The team organized a pair of restaurant fundraisers, partnering with Wantagh Smashburger and the Massapequa Diner, in which a portion of the checks on specific nights go to the cause. Skyla and Joey have also forged partnerships with other school clubs as well as community organizations such as the Wantagh Chamber of Commerce and Wantagh Kiwanis Club. Skyla even appeared on a pair of podcasts to spread the word.

“The Wantagh community is very supportive,” Skyla said. “So many people find a personal connection to our cause.”

Photo caption: Wantagh High School seniors Joey Labo and Skyla Marchesi are two of the team leaders of Warriors for a Cure which is raising money for the Leukemia and Lymphoma Society.