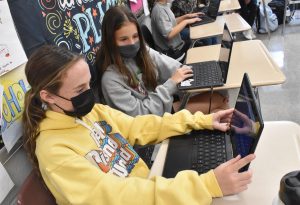 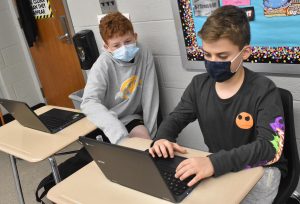 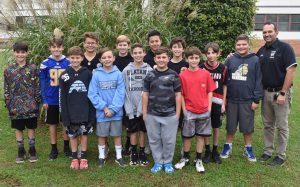 To honor a classmate who died of a rare form of cancer, students at Wantagh Middle School are doing their part to boost funding for pediatric cancer research.

In his seven years, James Lodato made a huge impact on everyone around him, including his classmates at Forest Lake Elementary School. He died from a rare soft tissue cancer, alveolar rhabdomyosarcoma, in May of 2018. James would have been a sixth grader this year and a group of his friends recently approached middle school Principal Anthony Ciuffo with a desire to do more to help cure childhood cancers.

Mr. Ciuffo said that the group of about a dozen students learned that less than 4% of the federal budget for cancer research is earmarked specifically for pediatric cancer. James’ friends want to see that amount increased, so Mr. Ciuffo paired them with students in seventh grade Research and Debate.

Teacher Kristin Piciullo added a mini-unit on pediatric cancer and invited the boys to spend half of their lunch period with one of her classes. Over four sessions, the sixth and seventh graders will craft persuasive letters together, urging an increase in funding for childhood cancer research. She said students will use their own research skills to identify people who can affect change and will send them letters.

Seventh graders in her other three Research and Debate classes will also be working in pairs to write letters. Ms. Piciullo said that persuasive writing is one of themes of the elective course. Students learn how to convey emotion while also including facts and statistics to support their cause.

“Anytime students feel passionately about something, you can’t let that go,” she said. “If you find a teachable moment in it, you take it. In Wantagh, students are passionate about doing something meaningful to remember their friend James.”

Coincidentally, she added, the effort began on Oct. 27, James’s birthday.

The sixth grade class will also contribute to pediatric cancer research. Adviser Ariel Adrian said that while each class typically spends three years raising money for a party at the end of eighth grade, Wantagh’s sixth graders want the funds to go to a cause that’s important to them.

They will soon launch a web page to sell special Wantagh T-shirts with a gold ribbon design that symbolizes childhood cancer awareness. Money raised will go to Alex’s Lemonade Stand Foundation, which funds research and provides support to families with children battling cancer. Ms. Adrian said that after a considerable number of shirts are sold, there will be plans to have middle school students and staff wear them on the same day to honor James.

2: Seventh graders Olivia Haines, left, and Ava Barberio did research about funding for pediatric cancer research as they prepared to write a letter together urging an increase.

3: Sam Mendolia and Ben Fuer worked on their persuasive letter in their Research and Debate class.