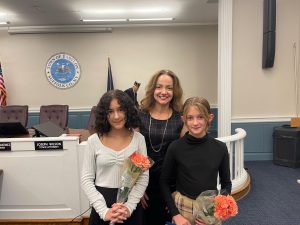 Photo caption: Two sixth grade students from West Babylon Junior High School were named winners in the Town of Babylon’s Veterans’ Awareness Week Essay contest. Angela Rosenberger won first place and Sienna Cruz was named a third-place winner. Both students felt that it was important to write the essay about their appreciation for the veterans of this country. Rosenberger decided to take her prize money and purchase turkeys for families in need for Thanksgiving. They are pictured with their teacher Mrs. Brower-Cohen.