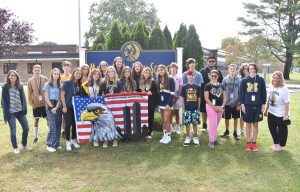 For ninth graders at Massapequa High School’s Ames Campus, the terrorist attacks of Sept. 11, 2001 are a historical event. In remembrance of all those who lost their lives that day and since, students collected money for a pair of 9/11 organizations.

The social studies department and Helping Hands club paired up for the fundraiser, which ran from Sept. 10-24. Students donated nearly $700 and contributions from staff members brought the total amount raised by the Ames community to about $950. Money will be divided between the Tunnel to Towers Foundation and the 9/11 Memorial Museum.

Social studies teacher and Helping Hands co-adviser Nicole Reiss noted that the collection drive began the day before the 20th anniversary of the attacks. She explained that while it happened several years before they were born, it was a tragedy that had a profound effect on the adults in their lives.

Student Payton Christopher said she made her donation in honor of all families who lost a loved one, while Kaylee Horigan did so as a tribute to first responders and rescue workers who ran into danger to save lives and who worked at site for weeks and months after the attacks.

“They helped us,” she said, “and it’s almost like paying them back for what they did for us.”

Photo caption: The Ames Campus social studies department and Helping Hands club combined to raise about $950 for a pair of 9/11 organizations.