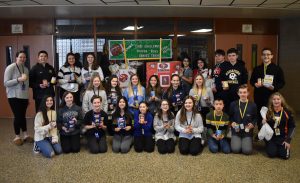 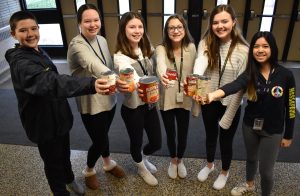 A football-inspired charity drive resulted in the collection of hundreds of food items at Berner Middle School in the Massapequa School District. From Jan. 27-31, students and staff could donate non-perishable goods in the eighth annual “Souper Bowl” hosted by the Chief’s Challenge club.

Two boxes were placed in the auditorium lobby – one for the Kansas City Chiefs and the other for the San Francisco 49ers. Students could place their donations into the box of the team they felt would win the Super Bowl. Perhaps in an homage to the team that shares its nickname with Massapequa teams, the Chiefs box was filled higher.

Chiefs Challenge advisers Marisa Boulukos and Caroline Glynn said that all donations would go to the YES Community Counseling Center’s food pantry. To raise awareness for the food drive, posters were hung throughout the school and the daily announcements include facts about hunger on Long Island.