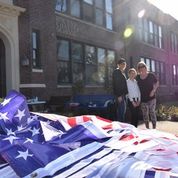 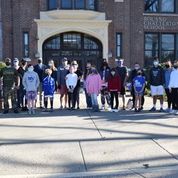 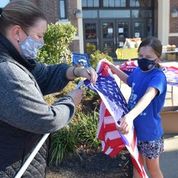 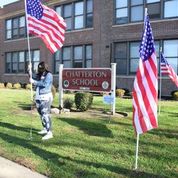 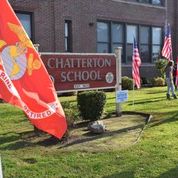 From Nov. 7 to Dec. 8, students, faculty and staff at Roland A. Chatterton School will be greeted by 100 billowing American flags lined along its courtyard. Community members were encouraged to honor family members and friends who served in the United States Military by purchasing an American flag as part of the school’s inaugural “Field of Honor.”

The event, sponsored by the Chatterton Parent Teachers Association, brought several dozen volunteers to the Merrick Union Free School District elementary school on Nov. 7. Students, parents and community members worked in unison to plant the flags along the school’s front lawn in honor of Veterans Day.

The proceeds from each flag, which ranged from $20-$50, will benefit the Bellmore-Merrick food pantry, Community Cupboard, as well as Operation Heal our Heroes and the Wounded Warrior Project—both of which are organizations dedicated to offering services and programs to support veterans.

All those who sponsored a flag were also gifted a keepsake 3’x5’ American Flag in honor of their heroes.