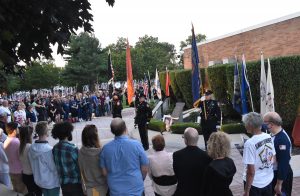 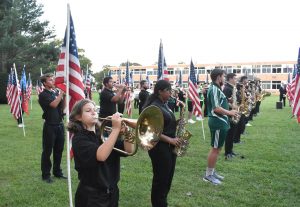 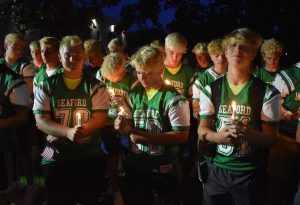 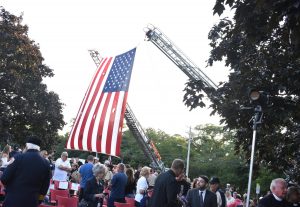 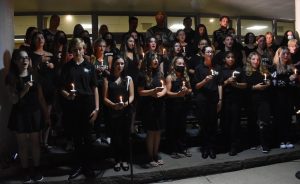 From end to end, the Seaford High School front lawn was filled with community members who came to pay their respects to all those who died in the terrorist attacks of Sept. 11, 2001, including five alumni – Thomas Haskell, Timothy Haskell, John Perry, Robert Sliwak and Michael Wittenstein. The 20th anniversary memorial ceremony began before dusk and ended after sunset, allowing the candles that were lit near the end of the service to glow bright.

Students, teachers, administrators, elected officials, clergy, Boy Scouts and Girl Scouts, leaders of community organizations and family members of the five alumni were among a crowd estimated at more than 2,000 people. Over the front walk flew a large American flag, hung from the raised ladders of Seaford and Wantagh fire trucks. The colors were presented by the Nassau County Police Color Guard and patriotic music was provided by the Nassau County Police Pipe and Drum Band.

After Superintendent Dr. Adele Pecora led the crowd in the Pledge of Allegiance, the Seaford High School band, set up among the field of American flags on the north side of the lawn, played the National Anthem. In front of them, firefighters from Seaford and Wantagh, in their crisp uniforms, saluted.

Retired Seaford High School Principal Raymond Buckley, in his welcome message, said they were extremely blessed to have a perfect night for the 20th anniversary ceremony. Dr. Pecora said it was heartwarming to have so many people from the Seaford community and beyond in attendance. Former Congressman Peter King, who lives just blocks away from the high school, added that it is testament to the perseverance and lasting courage of the people of Seaford that the ceremony continues to draw a large crowd every year, even two decades later.

Teacher Shari Raduazzo, the Seaford High School Pathways to Service moderator, and Giana Cesario, a 2021 Patriot Award scholarship recipient, presented Dr. Pecora with a binder filled with service commitments made by Seaford students, residents and community organization over the past year. The district and the Seaford 9/11 Memorial Committee have emphasized a commitment to service over the past 20 years in honor of the five alumni who served their communities in various ways.

Ken Haskell, president of the 9/11 Memorial Committee and brother of Thomas and Timothy, spoke about the five alumni and how they represented the goodness in humanity.

“All these men were proud to be Vikings,” he said. “They shared the same hopes and aspirations as the students here tonight.”

Haskell’s cousin, David Haskell, an active member of the military, said every high school in the United States should have a service like in Seaford on the anniversary of Sept. 11. Monsignor Steven Camp, who was pastor of St. William the Abbott Church when the attacks happened, also noted the uniqueness of Seaford’s ceremony. He called on everyone in attendance to “find hope, do good and love each other.”

A bell tolled 11 times – once for each of the five alumni, as well as for all victims of the attacks, the first responders and rescue workers, veterans and members of the armed forces, COVID-19 victims, in thanks to the Seaford community and in hope for world peace. As the final bell tolled, a helicopter flew over the high school.

1: With a large American flag held up by ladder trucks from the Seaford and Wantagh fire departments, students, teachers, administrators and community members gathered at Seaford High School to commemorate the 20th anniversary of the Sept. 11 terrorist attacks.

2: Seaford athletes participated in the candle lighting ceremony to remember all those who lost their lives in the attacks and from 9/11-related illnesses.

3: A color guard from the Nassau County Police Department lined the plaza in front of the memorial plaques for the five Seaford High School alumni who died in the attacks.

4: The Seaford High School band performed the National Anthem among a field of American flags.

6: More than 2,000 residents of Seaford and beyond are estimated to have attended the 20th anniversary memorial ceremony on the evening of Sept. 11.